T-Pain shows us how to use the new GarageBand

T-Pain is bent over an iPad, dancing and tapping the screen to send glimmering electronic beats through huge speakers and out into the hallway of his home. We’re down in T-Pain’s basement studio, in a room filled with giant control boards, cases of equipment, and everything you’d need to put together a radio hit. But the only studio equipment T-Pain is using is his speakers — all the better to blast out the music he’s putting together in GarageBand.

T-Pain works with Apple to promote GarageBand, and I’m here at his house, just outside Atlanta, Georgia, to see what he can do with the app’s latest iteration. He’s been playing around with an update to GarageBand for the past week that few other people have access to. The new iPad version adds an interface called Live Loops. It’s basically GarageBand’s take on a MIDI controller, and it should make getting started with music creation much easier.

Speaking with T-Pain is kind of surreal. Though you’d know his Auto-Tuned voice anywhere on the radio, you might not know his actual voice: it’s bright and jovial; he’s quick to laugh at a joke and bounces around from talking craft to making Game of Thrones references and discussing new tech he’s interested in. He’s filled the lower level of his house with arcade games, colorful skateboard decks, and blown-up magazine covers with his face on them. Even his studio is playfully decorated, with bright red walls and light fixtures shaped like microphones dangling above your head. 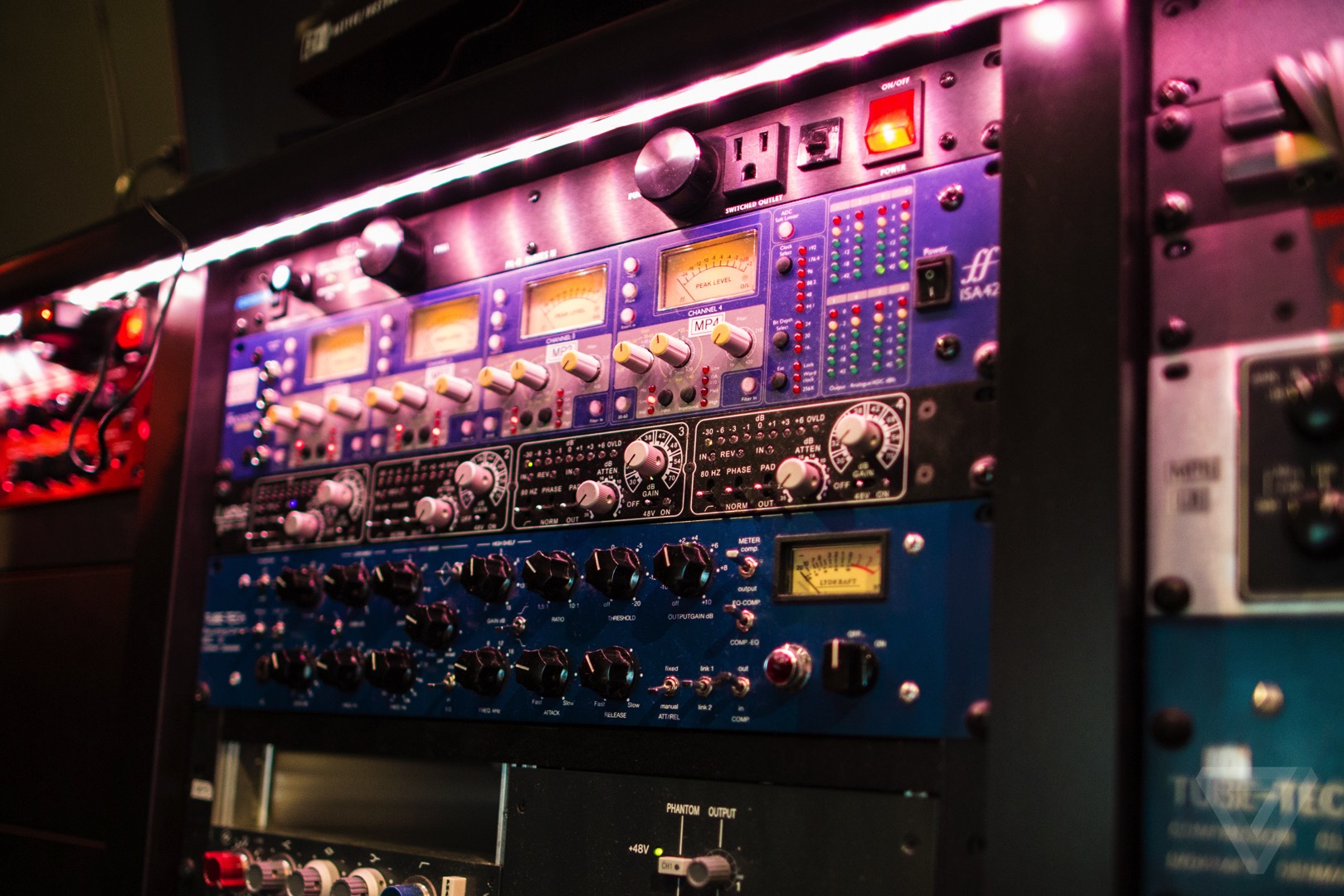 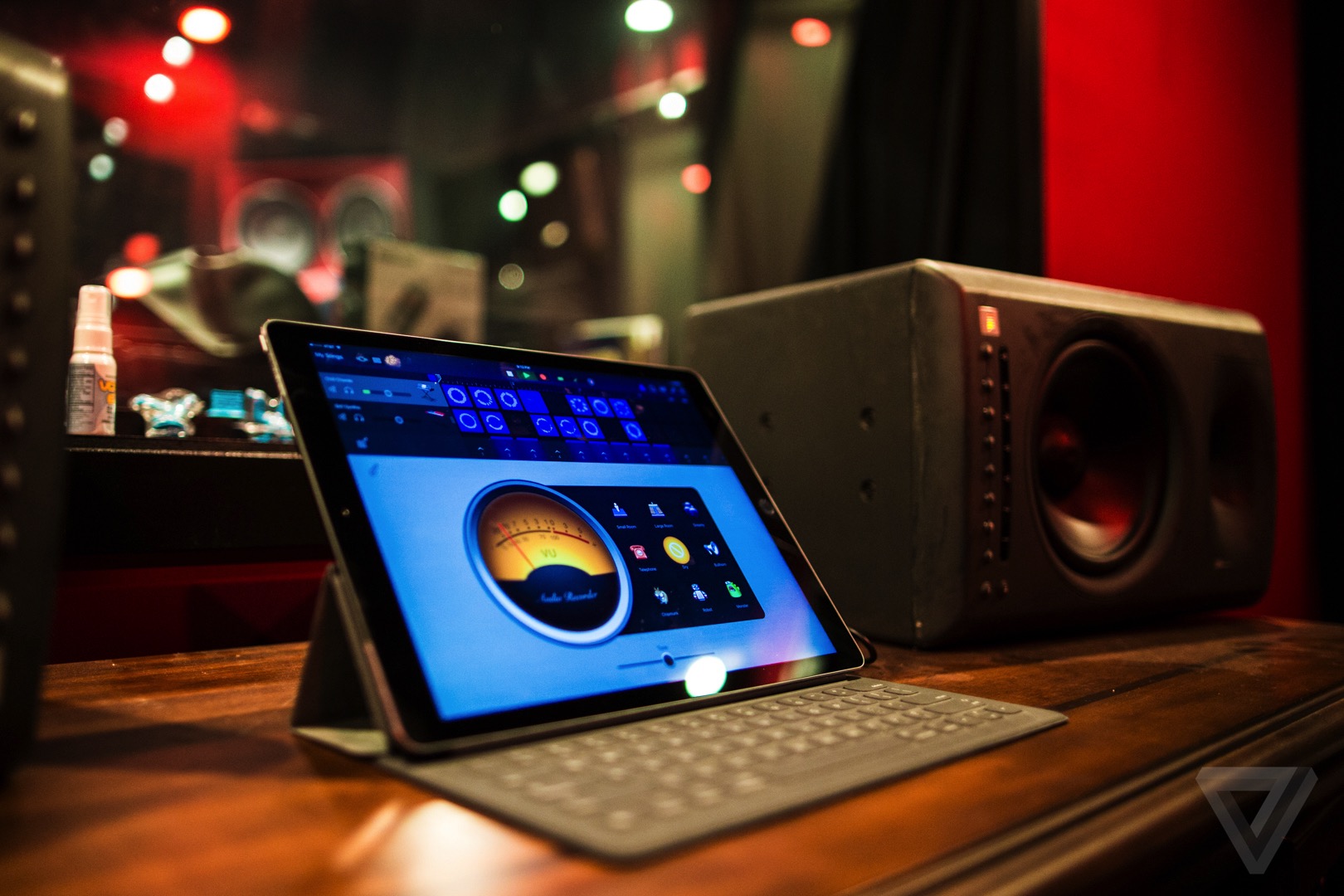 It’s in here that T-Pain’s been using Live Loops to put together a new song on the fly. He has the app opened up to its new interface — a big grid of squares, where each square represents a musical loop. Tap a square, and a loop starts to play. T-Pain is carefully timing out when he introduces each new sound, but since the app is largely for beginners, each loop can be set to automatically sync up with every other loop that’s still playing. Get a few going at once, and you’ve basically got a song.

T-Pain was using GarageBand long before Apple reached out to him. He says he’s been using the app for years as a way to quickly put together new beats. Over a decade ago, outside clubs in Tallahassee, he’d use the app to make songs for people on the fly. Since then, he’s used GarageBand while making Rappa Ternt Sanga, his debut album, as well as songs here and there throughout his more recent albums. “If I tell you that the last song I released was completely done GarageBand,” he says, “you either wouldn’t believe it or you’d go, ‘I need to check out GarageBand.'”

You can very quickly make something fun (but not necessarily something good)That sort of heavy professional usage isn’t necessarily what this new interface is for. At first glance, at least, it seems more for people like me, who don’t know the first thing about putting together a song. Because you’re working with loops, rather than clips that play straight through, you can easily play around and put together something fun. But note that “fun” is very different from “good” — T-Pain didn’t seem interested when I mentioned the Jazz/Club beat I’ve been working on, and my girlfriend, who’s heard the track, describes it as “nonsense.” Still, Apple is likely hoping that a lot of kids will make their first songs this way. 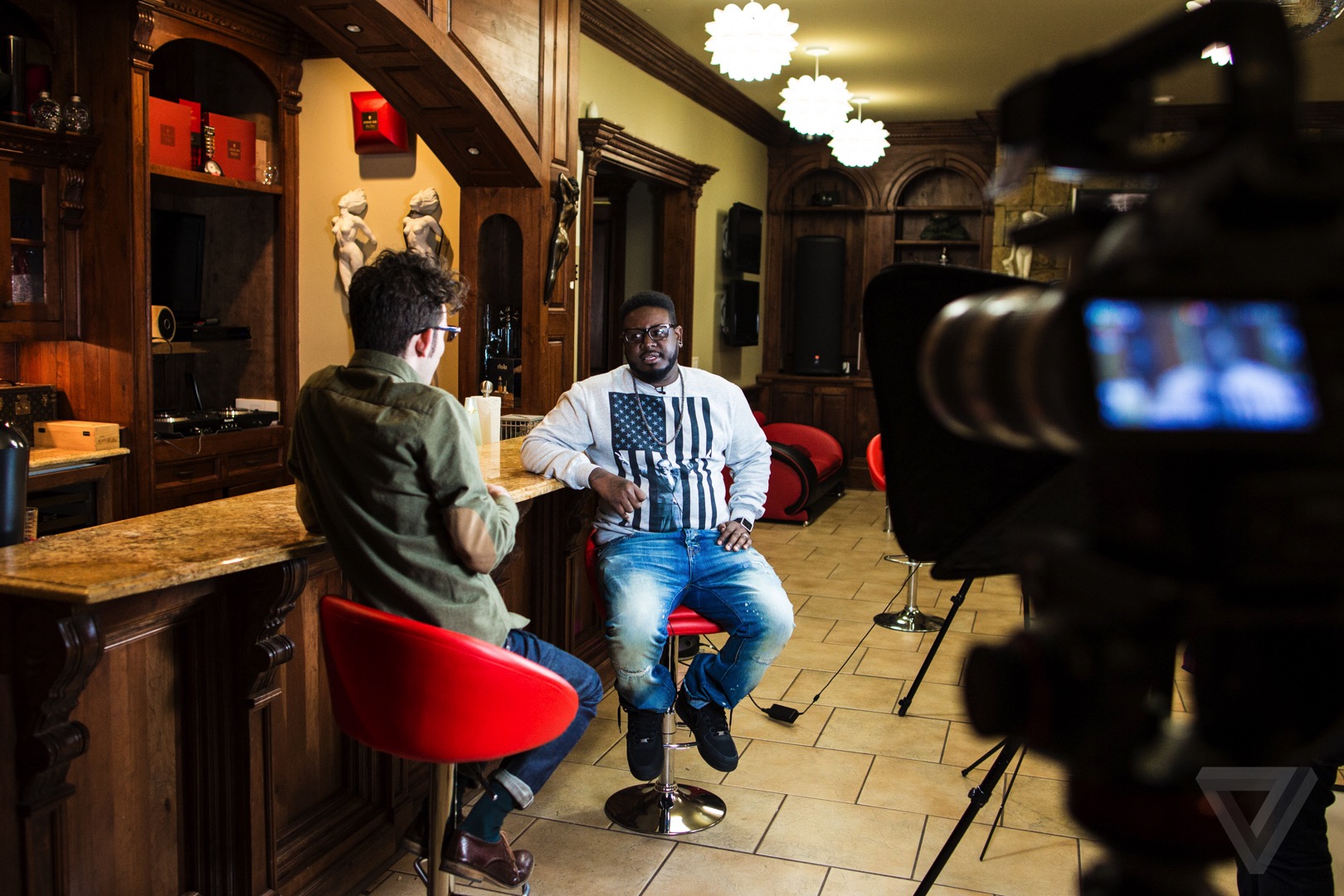 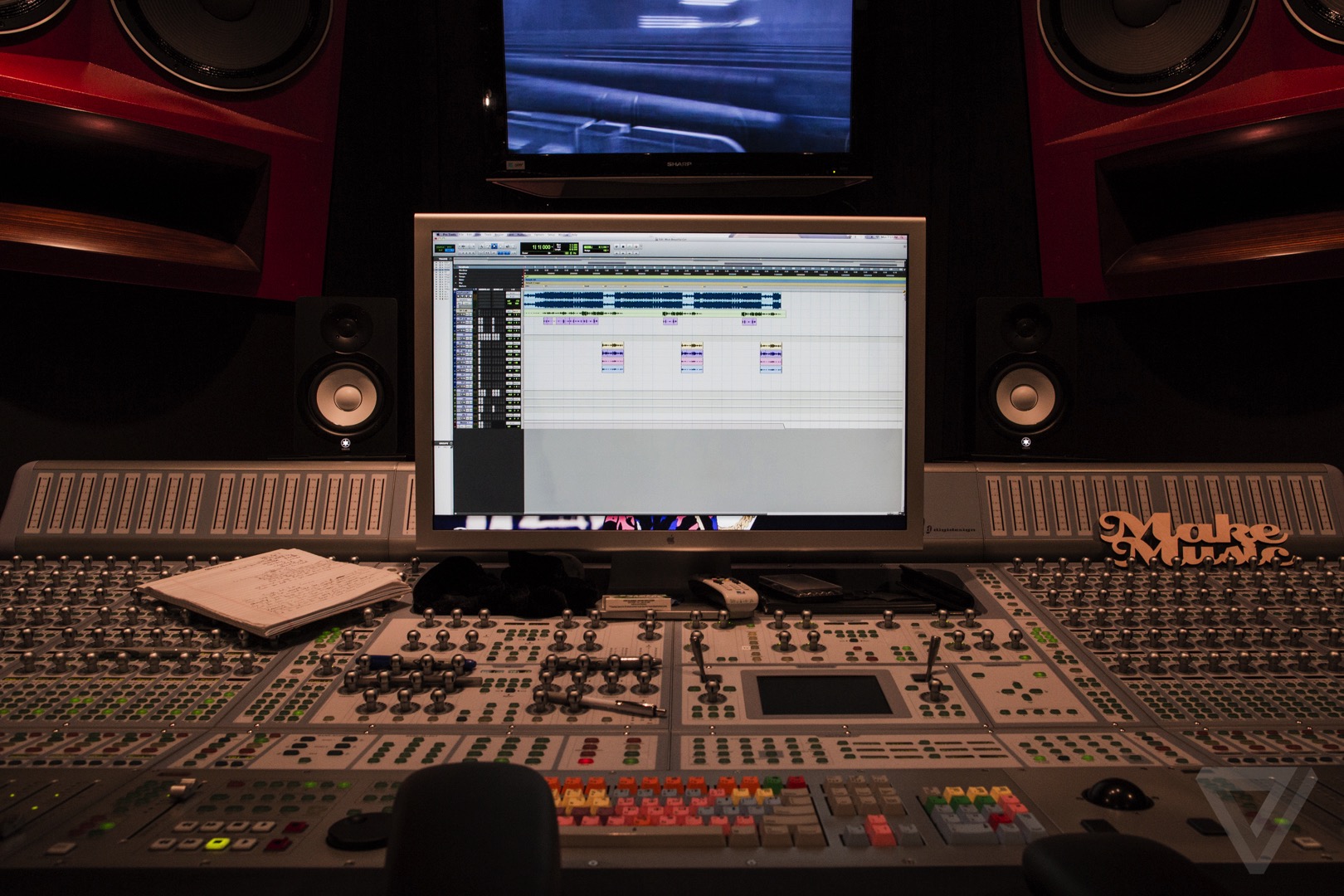 Of course, the persistent criticism of GarageBand is that, while it may be good for getting started, it’s still too limited to be used by serious artists. Eventually, they have to move on to programs like Logic (which is also made by Apple), Ableton Live, or Avid’s Pro Tools. Pitchfork has a great feature on GarageBand from last year that included several musicians describing their early experiences with the app as empowering, before ultimately saying that they had to move on to something more flexible. Many artists seem embarrassed to be associated with GarageBand, since it’s seen as a tool for amateurs. Grimes, for instance, has gone out of her way to dispel the myth that she relies on GarageBand. (She used it on her breakout album, 2012’s Visions, but she’s since switched primarily to Ableton.)

T-Pain laughs off the criticism when I ask him about it. “That’s weird,” he says. “It’s totally legitimate.” GarageBand has become a lot more capable over time, he says, offering more granular control over sounds, the ability to manage more tracks, and — a new feature in this release — the use of third-party apps, like iMaschine, as additional instruments. It has nowhere near the power of Logic, but T-Pain says he sees Apple bringing more of Logic’s features down to GarageBand, rather than stripping things out of GarageBand for further ease of use. That makes Garageband a useful tool for putting together ideas when he’s outside the studio. “Usually when I open up GarageBand, I’m not in a place where I can start belting out lyrics and recording,” he says, mentioning that he often uses the app while traveling. “I’m trying to get a solid production piece out of it. And that usually happens.” 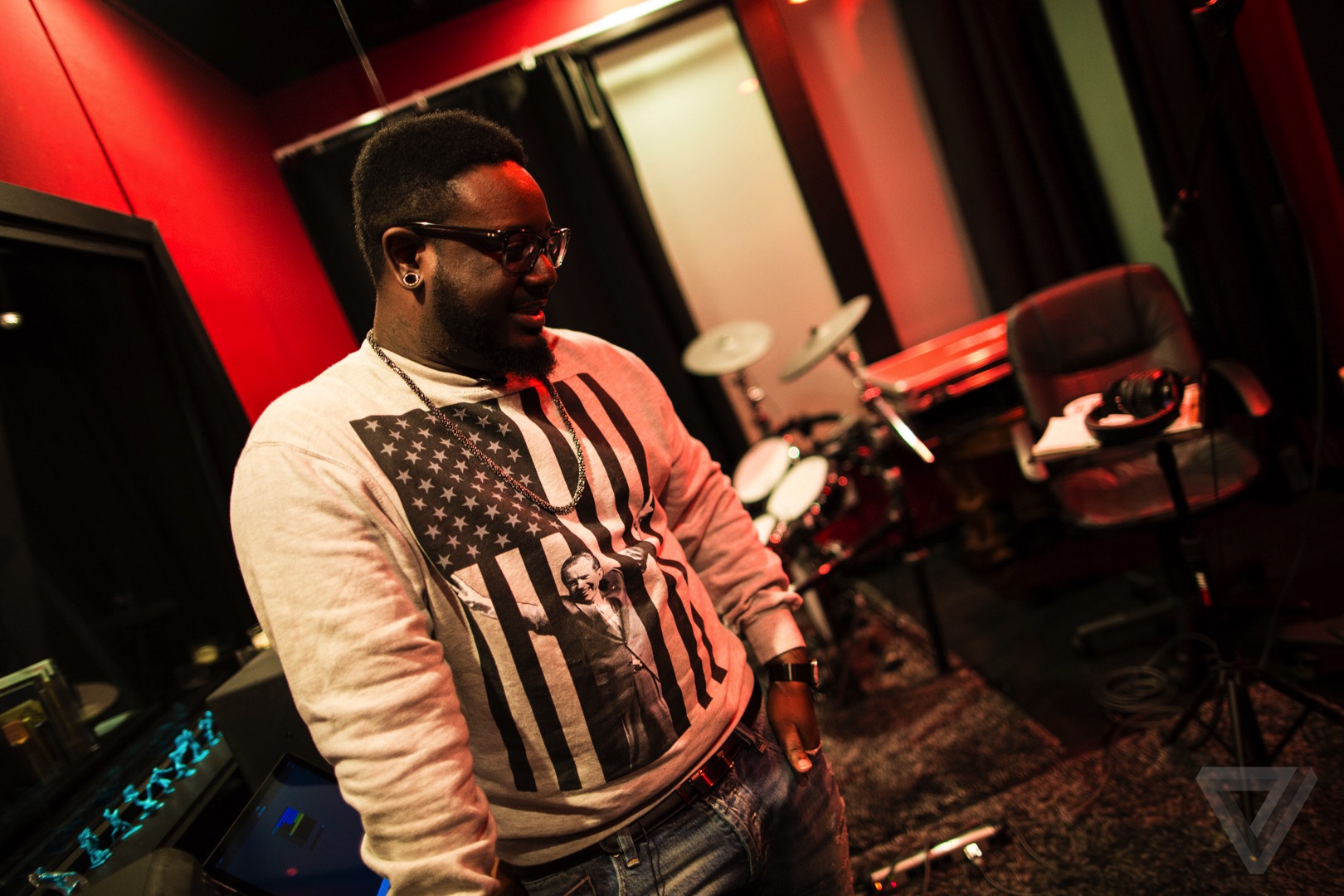 While T-Pain steps out to take a call, I strike up a conversation with his studio engineer, who’s sitting behind a big display running Pro Tools mounted above a control board covered in hundreds of knobs. His assessment of GarageBand is largely the same as T-Pain’s: the app, he says, is perfectly capable for assembling a track, even if it can’t take a pro all the way to the final, polished product. “Pain and I always like to say, ‘It’s the carpenter, not the hammer.'”

When T-Pain returns, we start to go through more of what GarageBand’s Live Loops interface can do. He’s bent over the iPad again, quickly creating a new loop by almost haphazardly tapping a few keys on the on-screen piano. What he creates is short and sparse — it doesn’t sound like much, and I’m expecting him to delete it the second I leave. But then he starts to play the new loop over of a song he’s been working on. “Here we go,” he says. He scrubs ahead to part of the chorus and starts to play the loop again. It fits perfectly. “I’ll probably end up using that right there.” That quickly, his demo has gone from a square on a grid to a tiny piece of a work in progress.

“I actually have done something with this.”GarageBand isn’t the only app out there trying to make music more accessible; it isn’t even the only app using a gridded interface like Live Loops. But as a serviceable music creation tool that’s available for free to all iOS devices, it’s hard to ignore the greater role it can have in enabling music creation for people who otherwise wouldn’t know how to get started. It’s expanding on that in other ways, too. GarageBand for the iPad is also getting a feature called Drummer, which can automatically add drums in several different styles, and Apple is releasing a brand new app for recording called Music Memos, which is meant to let people who play guitar or piano quickly capture their ideas.

These aren’t things that T-Pain needs; he knows his way around far more complicated tools. But if you take his word for it, GarageBand still manages to make creating music easier for him. And Live Loops is Apple’s attempt to start doing that for everyone else.

Before leaving, I press T-Pain one final time on whether he could actually see himself using GarageBand’s new interface to make a final song. “I actually have done something with this,” he says, grinning at me. “You’ll recognize it.”

Correction: T-Pain works with Apple to promote GarageBand but has never been paid to do so, as this article previously stated.